One day in life

Looking back at journey of Dana Feminová to Kenya

Marry sounds of children and birds wake me up. I open my eyes and through the mosquito net I can see the first sun rays. The day begins and children are coming to school that is was built just next to the house for doctors at a clinic that is my home for a few days. I have breakfast with a Slovak doctor Daniela, who came here for 6 months to help the local personnel at our clinic.

Already at breakfast she is preparing some medicaments from the storeroom and is getting ready for her ambulance. From the terrace of the house we can see the first patients expecting her in the waiting room.

I am taking a bag with games, building blocks, colouring pictures and methodology manual for teachers and I am heading through our community centre to the building of our nursery school. I am walking through the school. Children in school uniforms greet me from all the classes, where they are ready for the beginning of lessons. I am meeting teacher Evans. In a hurry he reminds me the drama class has prepared a performance for this afternoon that begins already at 4 PM. I am promising to be there. When I am approaching the nursery school I can hear a lot of small children calling my name. Many of them cannot resist the joyful „mzungu, mzungu” („a white man“ in swahili), which we hear so often all over Kenya. It is a common reaction of children when they notice a pale face, unusual for them.

I am entering a large area of nursery school where 4 women teachers with a few groups of children are working, using the teaching method of Montessorri. The youngest, 3-year old children are just singing and dancing together, the next group is working at little tables, pre-school children are learning in pairs at a terrace. I am interrupting the lesson for a while and give them presents from a partner school in the Czech Republic. In a short time the children are colouring the Mole pictures and trying to match the puzzle of animals. The oldest boys together with their teacher are building the wooden blocks. The presents are very successful so I am taking my camera and video camera to capture the joyful moment, because I want to make happy even the Czech children who prepared the presents. I am leaving the children playing and I am hurrying for a meeting with a builder who has been finishing a new shelter for orphans.

Ken is expecting me, the president of our organisation in Kenya who I came with to the island from Nairobi, as well as the local coordinator of the whole community centre of “Island of Hope”, Joash. Together we had a dream about this whole project on the Rusinga Island on the Victoria Lake 9 years ago. At Joash´s during one of my first visits on Rusinga Island. We did not hope at all at that time that it would be possible to build the complex of community centre with an orphanage, nursery school, school, education centre with library and even a medical clinic in such a short time. We also did not suspected what it means to run such a centre for more than 300 poorest children and the whole local community. We did not know how many challenges we would face.

On the way to the new building of shelter we are getting clear with Ken and Joash the main issues to discuss with the builder Dan. Then we are walking through the building. Joash points out at imperfections that are necessary to remove: to finish the last paint, to repair the entrance metal door, to finish tiles in the bathroom...We agree on the date when the whole shelter will be equipped by furniture and the surroundings cleaned from the rest of building material. We are discussing the last doubts at the budget. Dan finally agrees that he will order ten more beds from the original budget. The situation is then solved. From January we can extend the capacity from the present 42 up to 80 children. Ken is announcing that the family of our “adoptive” girl Evalyn that I wanted to see is expecting us. We are leaving the centre and walk across the island.

It is one of the sad heartbreaking stories that had been a part of my life during the 10 years of “Adoption of African children – project of help for distance”. I knew Evalyn since she was 7, she was one of the first children in the programme we had begun in 2002. She was 16 and even if she still attended school, she was pregnant. This year at the beginning of August she gave a birth to a beautiful girl. Her birth was complicated, but thanks to health insurance she was immediately taken to hospital and so it went all right. After a few hours she was sent home. But she suddenly died after 3 days. A small, 3-year old girl from the neighbourhood found her on the floor with a crying baby in her hands and she took it to the neighbours.

I am in front of a poor clay house and with tears in my eyes I am hugging Evalyn´s mum, who is holding in her hand a small baby – a girl who is very lively. I am getting her immediately into my arms and we are entering the house. I am bringing at least one goon news – “the adoptive parents” who supported Evalyn have decided to support financially the upbringing of the girl so she does not have to worry about lack of money for milk. She thanks a lot and is offering us a cup of traditional “porridge” (made from millet). I am making a few pictures and saying goodbye. I have to get back to the clinic, because there is going to be a meeting with all the stuff so that after evaluation of the operation of the clinic we can modify some rules, shifts and start a mobile clinic.

The mobile clinic should ensure medical treatment to the patients in remote villages of Rusinga as well as on the close island Mufangano. It is necessary to increase symbolical registration fee for patients and think about how to keep the clinic going without preventing the poorest to use its services. We still do have money for salaries of the stuff and for medicaments thanks to the donation of Slovakaid, but this project to run the hospital finishes in a year so there is a hot issue how to arrange all services in future.

After the meeting with the personnel of the clinic I am in a hurry for the performance of the drama class at school – under a large tree in the middle of the areal all the school as well as nursery school had met. Thanks to amazing scenery it really looks like in the theatre. Our drama class celebrates huge successes – at a regional competition of all schools they took the second position. Small actors recite and play so lively that all the stage as well as audience is enjoying it. Even the workers finishing the building of orphanage stop working to watch the performance with us. I tried to capture it on the video camera but I am afraid that as most of the situations here it is not possible to capture – one must experience it. It is getting dark. Dark clouds promise heavy rain so there is no extra performance, the theatre is finishing and children are running home. I congratulate to the teacher Evans, the author of the play who is the successful leader of the club.

Evans and his young colleagues make good job at school. They try to include now methods form the seminars for teachers that we regularly arrange on Rusinga. They keep on insisting on non-violent attitude to children which is what makes them difficult with the local community. In most schools on the island it is a natural thing to use a “cane” as an educational method. There is a strong belief that without a physical punishment there is no discipline and without discipline there is nothing from the pupil.

Children are asking me if I would be with them in the hall during the evening activities before going to bed. They try to persuade me to tell them who is going to move to the new shelter. I am promising to come after dinner offering a chance to record a message for their “adoptive parents” in the Czech Republic. A few of them are applying immediately, standing up in front of the camera. I am recording a few cute messages and giving thanks and Joash is calling at me that we are leaving. I am invited to his family for dinner so I am saying goodbye to children with a promise that after dinner I would reveal to them who should move to the new building.

We are leaving by car to Joash where his two wives and about 12 children are expecting us. The youngest children in the lead with Milan are welcoming us. I am giving them presents and before dinner we are playing their favourite pairs. The meal is delicious as usual and the whole atmosphere in this large family is just awesome. But to keep the promise to the children in the orphanage I have to say goodbye. Ken drives me back to Island of Hope.

Children with the teacher Millicent are in the dinnig hall so I managed that. We are talking, I am answering thousands questions about the Czech Republic, than the children are singing and showing me homework. Finally I am revealing the new hostel would be for girls so that the boys would have the present one only for themselves. Girls are excited and cannot wait until they are moving and boys are asking when the new friends for empty space in the room were coming. With this sweet news we are saying goodnight. It is really late, our eyes are closing. I am accompanying children to their rooms and I am leaving to the house at the clinic to listen to the impression of the Doctor Daniela from the afternoon meeting with the stuff during a cup of tea.

One unforgettable day is ending slowly.

The shortened version of the text will be printed in the next issue of Respekt. 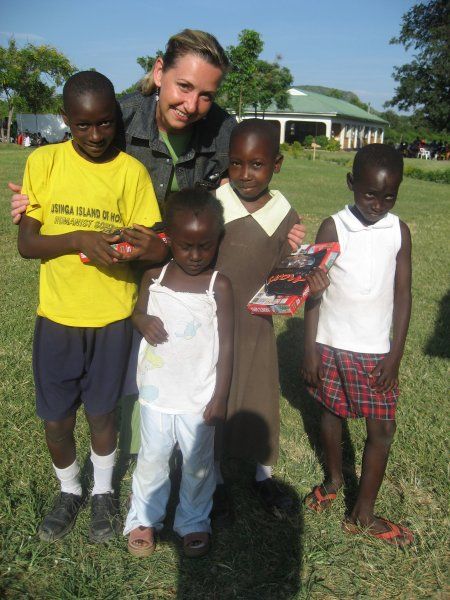 7 years old
Jayden was born in 2015 and is an only child. Jayden’s father is a driver, while his mother is a housewife. The family...
Another 172 children for adoption »